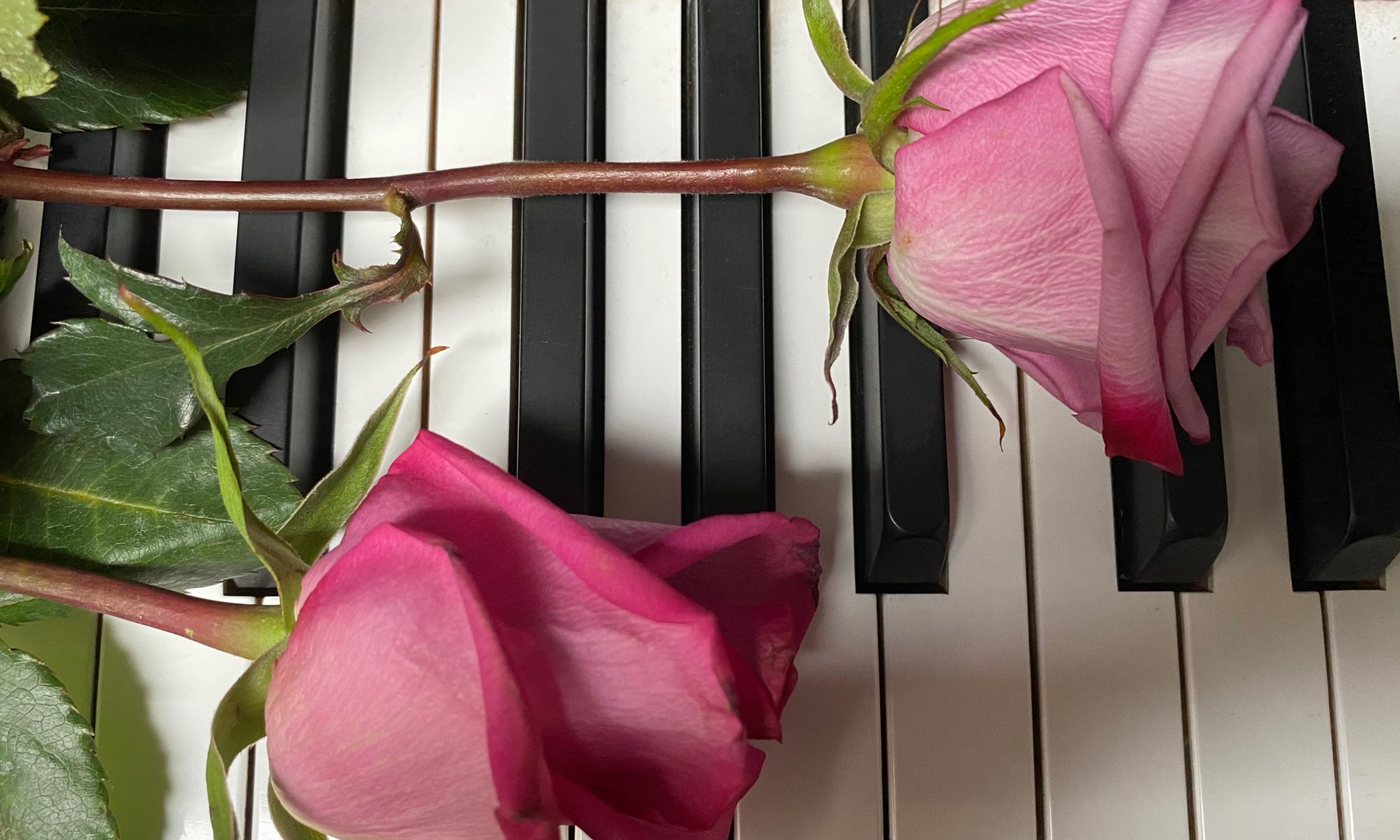 Disappointed Don sat on my piano bench, looking perplexed as to why he couldn’t manage to take a decent solo on C Jam Blues. “Should I be learning the modes of the ascending melodic minor scales in all 12 keys – is that what I need to do?” he asked. Truth be told, after several lessons my sweet and studious adult student still struggled with swinging the 2 note melody to the tune. Don poured over every jazz piano and music theory book he could get his hands on, took weekly lessons from myself plus another piano teacher in town, attended jazz workshops/adult music camps whenever he could. I think he had too many masters to try to follow, too much theory to sort out, too many scales buzzing around inside his head, which in turn caused his fingers to freeze at the keys! (It didn’t help that he spent more time reading a stack of books about jazz instead of actually practicing the piano.) By the end of his lessons Don would almost get the hang of articulating the melody to the blues.  He’d start to take a swinging solo if I limited his note choices to 2 or 3 notes, thereby causing him think more creatively about rhythms. But unfortunately, by next lesson he’d be back at square one, having excuses as to why he couldn’t get to the piano, with even more questions about the newest book he read on scales to use for improvisation.

I began to rethink this entire scale approach to jazz improvisation, and wonder just how necessary it is to practice scales in order to take a convincingly well improvised solo? Is there a minimum aspiring jazz musicians need to know?

Keep in mind, the whole “play this scale when improvising over that chord” concept was developed in hindsight after music theory scholars/historians looked back and analyzed the note choices great improvisers tended to use during their solos. (I seriously doubt sax player Charlie Parker was thinking when he encountered a concert C7 chord “I’m a Bebop musician, so now I’ll improvise with the C Lydian Dominant Scale and sure hope Bud at the keys will turn that chord into a C13(#11) to back me up…” Bird would have just intuited what sounded right for him to play faster than you can say “Cthirteensharpeleventh“.

However, since music theory teachers like to authorize, analyze, and categorize, we now have books and internet tutorials that advise us which scale to use over what chord. Personally as an educator, I love discussing music theory, chord/scale choices, and have written about using certain scales in my own improvisation books. But sometimes being too cerebral about scales can trip a soloist up, and take away the spontaneity of improvising.  Teachers of jazz may give advice that runs the the whole spectrum from “practice all types of scales and patterns transposed to every key, transcribe solos from the great artists, learn how to use approach tones and goal notes”, contrasted by others who may insist, “Nobody needs all that! Just listen and use your ear because any note in jazz works”. Who’s right?

This conflicting information must be confusing to the overwhelmed jazz student, who may wonder if they need to follow every music educator, author, or admired performer’s advice. Should they  learn “all” their scales and patterns applied methodically to all 12 keys first, well before they can even dream about sounding credible while improvising? The easily intimidated student (who may be a talented classical pianist), might freeze when they hear the words “just use your ear” because they don’t know how to “just listen” to the music, absorb it instantly, or where to begin applying what they’ve heard towards their own improvised solos! These students may retreat to their comfort zone of sticking to the written notes, assuming they “don’t have what it takes” to play jazz, and tell themselves they can’t possibly learn to improvise, thereby giving up on it prematurely.

Back to the question, “Who’s right?” Perhaps a reasonable combination of both approaches would be helpful, emphasizing one school of thought a bit more than the other, depending on the individual student’s most productive way to learn. Now let’s get back to the subject of scales:

The Classical Approach To Practicing Scales

When I majored in Piano Performance at UCSB all music students were required to learn 4 standard categories of scales: The Major Scale plus 3 types of minor scales –  mainly for performers to gain facility on our instruments so our fingers could fly over scales/runs when we encountered them in classical music passages. Every six weeks we had “piano juries” where we nervously sat in a crowded room with the music department head plus all the piano teachers, who would ask us to play a scale in a certain key a very specific way. We were expected to know the following in all 12 keys:

Additionally know these 3 minor scales all keys, same treatments as above:

(God forbid your piano teacher would ask for C# Melodic Minor Scale in 6ths, 4 octaves up and down the piano, which most of us skipped practicing…)

During Music Theory Class we also briefly touched on The Greek Modes (AKA Ancient – Early – Old – or simply called the Church Modes). The concept is easy to grasp on keyboard starting on the key note “C” going up the white keys, and a bit more challenging thinking in keys like “Gb”. For a more in depth explanation check out my article: Explaining The Greek Modes: https://debbiedenkemusic.com/2020/02/26/explaining-the-greek-modes/

The Jazz Approach To Practicing Scales

While classical pianists practice scales mainly to keep their fingers nimble, jazz musicians additionally learn scales so they’ll know a good sounding series of notes to select while improvising over certain chords. By this point I thought I was pretty scale savvy –  after all I knew The Major Scale in 12 keys, 3 Minor Scales for classical music, and a bit about the Greek Modes, of which jazz musicians concentrate mainly on 3 of them. There’s a lot of talk in jazz theory about the common “ii – V – I progression“, meaning chords which are based on the second, fifth, and first degrees of a major scale. Take the key of C for example: The ii chord is Dmi7, the V7 is G7, and the I chord is Cma7. There is a suggested Greek name for each mode (scale) to use for playing over the following chords:

Now wait just a second!!  Isn’t D Dorian really another type of minor scale? Yes, but it’s a different one from the 3 classical ones traditional university and conservatory music majors study! The Dorian minor is more common in jazz for two reasons: More compositions are set in major keys than minor keys. Often when you see a minor 7th chord in jazz standards or Great American Songbook tunes it functions as a iim7 chord. Additionally there was a period in jazz during the late 1950s early 1960s called Modal Jazz, made famous by musicians like Miles Davis & John Coltrane, who explored improvising over long stretches of the Dorian mode.

Astute observers may notice that the above modes use all the same notes as the parent scale C major, just with different names and starting positions.

OK, so we now have about 6-10 scales to know in all 12 keys (up to 120 total) – are there any more? Yes, there’s a very important one! It’s called The Blues Scale, which originated from Africa meeting America, getting that “inbetween the cracks” sound you can make with the human voice or by bending notes on guitar strings. The Blues Scale is important to know whether playing the blues, jazz, rock/pop, Gershwin and much contemporary music.

The 6 note Blues Scale is created (compared to a major scale) by starting with the root, adding a lowered 3rd, 4th, lowered 5th, natural 5th, and lowered 7th.

Are there any more scales? Yes, you bet! There are 3 recognized types of 5 note Pentatonic Scales: Major, Minor, and Chinese, various ethnic/cultural ones (including 3 Jewish Prayer Modes, Hawaiian, Arabic, Japanese, Spanish, Byzantine, Hungarian, Gypsy scales)*, 2 Whole Tone Scales, The Altered Scale, a few types of Diminished Scales, Lydian Dominant, Harmonic Major and Double Harmonic Major and a 7 note Blues Scale, just to name some that come to mind. In his 1988 book How To Play Bebop, jazz educator David Baker named a fistful of 8 note scales he and pianist Barry Harris built their teaching concepts around, called The Bebop Scales**.  And what the heck – let’s not forget the 12 note Chromatic Scale to end all scales! (Really not the final scale, since you can get extra note choices if your piano is out of tune, you study a culture with a different tuning system, play experimental music, or are able to think in quarter tones like singer/musician Jacob Collier). It’s mind boggling!!

Fortunately, you don’t have to learn all of the above scales in order to improvise convincingly! For those who’d like a little more guidance than “just use your ear” the following suggestions will help your solo sound clearly “in the pocket”:

1. Learn to improvise by playing around with the tune’s melody.

2. Learn to arpeggiate all chord tones in a tune.

3. Next, if you still want to explore using scales, learn when it might be effective to apply a scale based melodic idea, toss off a flashy run or pattern. This works especially well when a family of chords stretch out for a while remaining close to one related key center. There are often 2-3 good scale options to choose from, depending on the era/style of the tune, where the chord fits in the piece of music, and the player’s personal preference.

Improvisation is like flying through the air without a safety net – It takes desire, courage, practice, experimentation, perseverence, plus the ability to listen to do it well. Don’t be discouraged. When first getting started musicians go through a stage of playing “off” sounding note choices, similar to how we must pull the weeds out of our garden as it grows. The weeds become less frequent as we get better at cultivating our improvisation styles over time. I hope you enjoy the process, as your solos start to take off and fly!

In conclusion, the improviser doesn’t necessarily need to know any scales, but practicing them can give a musician dexterity plus additional ideas to play with. There’s a plethora of scales out there! I’d like to simplify and suggest the two best scale types to learn for improvisation: The Major Scale (because we compare all other scales to this one, including the Greek Modes), and the Blues Scale (because of its unique structure, so important to jazz and modern music). My book/audio methods The Aspiring Jazz Pianist and Amazing Phrasing – Keyboard have exercises exploring the blues scales, found on my Amazon Author Page:  https://www.amazon.com/author/debbiedenkemusic

*If after reading all this, you still are obsessed with scales, check out this article and click the category “Exotic Scales” https://www.pianoscales.org/

December is the perfect time of year to develop one’s ear training skills. We’ve been by saturated listening to Christmas & Holiday tunes playing all over the place since Halloween, and know those familiar jingles a jing-jing-jingling quite well by now, so well in fact we can’t seem to get them out of our heads! So you may as well face the music and do something creative with these tunes as long as you are hearing them over and over, right? END_OF_DOCUMENT_TOKEN_TO_BE_REPLACED