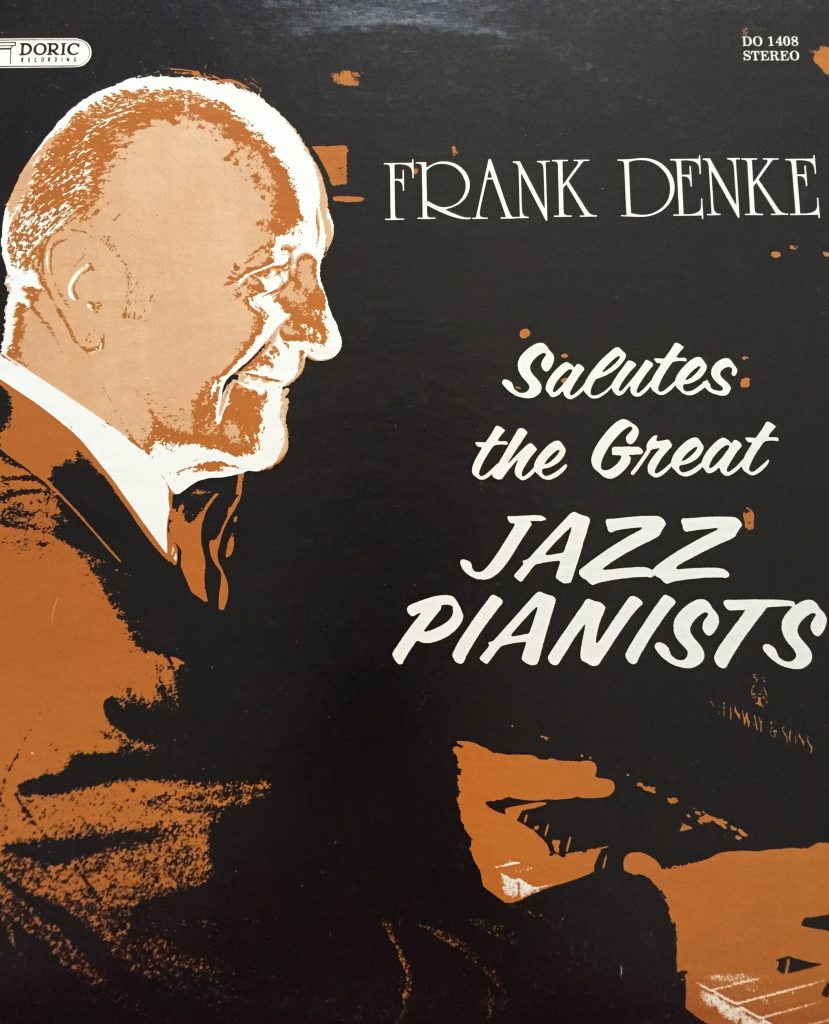 “Make the people happy.” My 20 year old self blinked incredulously at my father’s comment to my question, “What makes you want to keep being a professional pianist and what are your goals with your music now?” Frank Denke simply smiled and said again, “I just want to make the people happy!“

Dad was in his seventies when I asked him that question, and for most of my growing years he was the house pianist at The St. Francis Hotel, playing in The Terrace Lounge 5:00pm-9:00pm, 5 nights a week, for over 16 years. (On Sundays he was organist for St. Leo’s church, and Monday nights he accompanied choir practice). I grew up hearing stories about his gig at the famous San Francisco hotel; how he would raise the lid of the grand piano when a certain manager wanted Frank’s music to be heard as people entered through the revolving glass doors, and would lower the lid, plus apply the soft pedal when a different manager thought people should be able to converse quietly in the lounge. Dad remembered many people by their requests. If he saw a return customer walk in, or the food and beverage man stroll by, or a door man/bell hop/watchman/concierge was in ear shot he would play their favorite tunes. Homeless men sometimes would sneak up the lounge stairs (before they would be ushered out of the hotel), because they knew Frank Denke with his soft heart would give them a few dollars from his tips that night.

My father had quite a musical history before his gig at The St. Francis. He worked as a pianist for live radio and early TV both as a soloist, and band member with The NBC Orchestra. He supported 4 families as a working musician during The Great Depression. Dad worked under many leaders, some extremely temperamental, and some great ones too: Phil Harris, Xavier Cugat, Ferde Grofe, and Arthur Fiedler. He performed classical symphonic works, played in Latin and ballroom dance bands, wrote sacred church music, and especially loved jazz, but at The St. Francis he was known as a “cocktail pianist”.

Tony Bennett’s Famous Hit:  Every night Frank Denke played at The St. Francis he would get at least one request for I Left My Heart In San Francisco. On one particular night when he was playing this tune he was interrupted by a furiously angry man pounding his fists on the bar and shouting, “I’m going to KILL Tony Bennett! KILL HIM!!”

My dad stopped during the tune and approached the man asking him what was wrong. The man replied, “I wrote  that song, and ever since Tony Bennett recorded it wrong every g%&d&@#* cocktail pianist in this city plays it wrong!!

Dad invited Mr. Cory over to the piano to show him “the right” way to play the tune. It had something to do with the ascending line during the lyrics, “above the blue, and windy sea…” Dad showed me how George Cory originally intended the notes to go, and to this day I am still kicking myself because I can’t for the life of me remember! (But, truth be told, Dad and I agreed we kind of liked Tony Bennett’s interpretation better.)

Rhapsody in Rotten Cotton Balls: Whoever said being a cocktail pianist was an easy way to make a living? One night at The St. Francis Hotel, pianist Frank Denke got a request for Gershwin’s Rhapsody In Blue. Now, my dad could really play a great version of this tour de force, all 31 pages from memory with style! In fact, he was one of the very first pianists selected to play the orchestral version written and conducted by Ferde Grofe. So Frank poured his very best into honoring this person’s request. Clink! The man dropped 1 dime and 3 pennies on the grand. Later that night, another gentleman requested When Them Cotton Balls Get Rotten. My father remembered the chorus and faked the rest, and the man laid a $100 bill on top of the piano!

While on tour, many jazz pianists would stop by The St. Francis to hear Frank Denke (word got out that he was one of “the good ones” to go see). Dad was friends with, and introduced me to Erroll Garner, George Shearing, and Earl “Fatha” Hines. Although they were never formally introduced, Oscar Peterson had heard of my dad, and O.P. told me when we met he was a very fine pianist 😉  Frank was never one to boast, but he had some students who went on to more fame than he did. (It was my mom who told me that dad taught harmony to composer/pianist Vince Guaraldi of Charlie Brown fame.)

Last summer I took my husband and two daughters to visit The St. Francis Hotel so our girls could see where their grandfather was the house pianist 5 nights a week for over 16 years. I told them how The Terrace Lounge was to the left, up the stairs, just through the revolving glass doors. I also told them about the grand piano my dad played, the Japanese waitresses dressed in kimonos, the elegance and the $17 soft drinks from the 1970’s. Disappointment hit me as we saw they had renovated the lounge into a restaurant and removed the grand piano. We looked at some posted history of the hotel behind glass cases. The history talked about the famous actors and politicians who stayed there. (Republicans such as Woodrow Wilson, Ronald Reagan, and Gerald Ford stayed at The St. Francis. The Democrats stayed at The Fairmont Hotel – an occasional after hours gig for my dad.) There was mention of a jazz age, but nothing about my father.

If you happened to visit The St. Francis Hotel during the late 60’s, 70’s, and early 80’s you may have seen a bald gentleman playing the grand piano- dressed in a tux, twinkling blue eyes, with a beaming grin on his face, eager to play your request and make you happy with his music. That would have been my father and musical mentor Frank Denke. I hope he will be remembered!

7 Replies to “Make The People Happy”