How To Play the Musical “Guess that YOU-tune” Game:

The host will want a copy of Debbie Denke’s album, It’s All About YOU!*

Additionally the host will want a pencil for each guest, a fun dessert to serve for intermission, a prize for the winner (I suggest something musical like an album or a music book as an award), and have copies of the list of clues for each guest (or a page with blank lines numbered 1-16), plus a copies of the lyrics to #16 It Had To Be You. Clues and lyrics are found in this site under the Downloads tab above. Allow about 90 minutes to play this game.

Host will read aloud the tune number and it’s clue, but not the title. Remind guests that every tune has the word ‘You‘ somewhere in its title. Then play the track for your guests. Be ready to hit ‘pause’ between all tracks so guests have time to think about and write down each YOU-tune’s title. Give the clues, play and pause after numbers  1 – 8.

After number 8 is played, host can serve dessert and guests may talk about the tunes and learn the correct titles (keeping track of which ones they originally got right.) Take about a half hour for this intermission.

Resume the “guess that YOU-tune game” for tune numbers 9 – 15. Have everyone sing along with the band to the second half of #16, It Had To Be You. Tally up the most correct guesses, and award a prize to the winner!

*You can, of course hire a live pianist to play YOU-tunes at your party, but remember YOU got the idea here first!

A note from pianist Debbie Denke about this special selection of tunes:

People often wonder what goes on in a jazz musician’s mind during improvisation. Even though these tunes are performed solo piano style, the lyrics played an important part inside my head and out of my fingers. I feel each of these songs has a wonderful melody to bounce off of, inspirational harmony to play around with, and clever lyrics by some of the greatest teams of composers and songwriters in history. I encourage you to check out the complete lyrics to these timeless tunes!

The following is the list of tune titles with clues for the host to read aloud. The track number and the clue are in bold. The answers are below each question.

Track 1
Stevland Morris wrote this popular hit in 1973 – this is the most recent tune on this album – it was covered by Ella Fitzgerald (who took the line “apple of my eye” and segued into another tune about apples.)

Answer:
You Are The Sunshine Of My Life – Stevland Morris 1973

Track 2
’I recall’ this song (and the next) make a nice romantic medley – both end with the word ‘You’. This tune plays immediately into track #3…

Track 3
These lyrics speak about being in close proximity to you.

Answer:
The Nearness Of You – Hoagy Carmichael/Ned Washington 1938

Track 4
You’ll always be unique to me – even though there will be more lovers!

Answer:
There Will Never Be Another You – Harry Warren/Mack Gordon 1942

Track 6
This song gives advice like, “Don’t count stars or you might stumble” -Watch out or else…

Answer:
It Could Happen to You – Jimmy Van Heusen/Johnny Burke 1944

Track 7
A tragic ballad about the dark side of love, this tune debuted in a show with comedians Abbott & Costello called, “Keep ‘Em Flying”. This was one of Billie Holiday’s many tunes about love lost.

Track 8
Originally sung by Ethel Merman, this Cole Porter show tune had an alternate set of non-drug reference lyrics. (During the first half of this tune Ms. Denke envisioned Liberace on too much caffeine.) Sesame Street featured puppet “Ethel Mermaid” singing this to help to teach the letter “U.”

Track 9
The oldest tune on this album – its verse may be unfamiliar, but the chorus to this waltz is well known in barbershop quartet circles.

Track 10
Jiminy Cricket sang this during Walt Disney’s Pinocchio – (See if you can catch a few other twinkling references tossed in.)

Answer:
When You Wish Upon A Star – Leigh Harline/Ned Washington 1940

Track 11
Hugs go to the Gershwins for another lovely tune. This is Debbie Denke’s salute to both her father Frank Denke and Erroll Garner.  Frank’s handwritten transcription of Erroll’s arrangement is featured on the CD artwork. She says, “This rich ballad style sends me back in time to hearing my dad’s piano flowing through The St. Francis Hotel.” For more about The St. Francis Hotel read under Insights the article titled “Make The People Happy.”

Track 12
This one starts with a chorus of improvisation before you get into this Jimmy Van Heusen tune – The story behind it is Jimmy Van Heusen gave this catchy melody to lyricist Johnny Mercer, who decided to work on the lyrics while taking a train trip. Instantly, the method of transportation gave birth to the first line of the lyrics, “I took a trip on a train, and…”

Answer:
I Thought About You  – Jimmy Van Heusen/Johnny Mercer 1939

Track 13
A bartender’s dream tune – “Like a summer with a thousand Julys – you intoxicate my soul with your eyes” & other lyrics describing the buzz both love and drinks may do to a person.

Track 14
Cole Porter wrote the following romantic ‘stalker’ lyrics: “I’d love to gain complete control of you, and handle even the heart and soul of you” for this tune from the musical Silk Stockings.

Track 15
Most common thing said on Valentine’s Cards– Clever Cole Porter purposefully wrote satirically banal lyrics (and apologized for them) during the set-up for this tune from the stage musical, Mexican Hayride.

Now’s the time to get out the lyric sheets and sing along with us the second time through, It Had To Be You – This one goes out to my hubby/bassist RKC! And many thanks to my dear drummer (also a well loved music producer) friend Bones Howe for his tasty brushwork!

For more than a year Robert Kim Collins, Bones Howe, and Debbie Denke had a First Thursday of the Month gig in singer/owner Christy Martin’s clothing store – The Blue Moon Quartet made many fun musical memories playing tunes like these in Studio Encanto Santa Barbara! 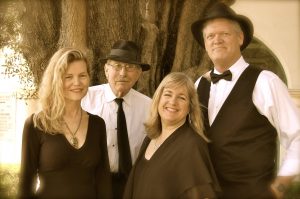 2 Replies to “It’s All About YOU! Party Game”